The very first time you use AngularJS is like your first date with a girl… You are very shy, you are sweating and you know nothing about the girl. Then you start asking questions and getting know each other.

Some people are saying that Angular is coming from the sky, some are thinking that its coming from India, other think that some aliens send us this new technology, but most of us know that is actually just another product of the giant Google. AngularJS is JavaScript framework invented by Google at the end of year 2010. The main idea of this framework is to not reload the page when you want to go another page, everything is happening by modifying the HTML DOM. The year that google invented this framework didn’t change much the tech industry, nobody believes in the new revolutionary things. We all know that the new technologies are not going to the top at the very first beginning, for example like Tesla. The new products need time, time for the users to realize how awesome they are. When Google invented this magical framework, people didn’t even realize that this will change the tech world. The framework started the era of JavaScript developers, the JavaScript projects, the joy of client-side programming, the hybrid mobile applications. JavaScript went on a whole new level.

AngularJS is nothing much, but its everything…

We all know that Google changed the world with its search engine tool, the google tools are being used by millions of people and they are part of the lifestyle of everyone with mobile device. In 2010 Google realized that there is no point of having only few apps on the market and decided to conquer the world by creating a framework that developers will love and clients will spend their money for.

Angular meant to be a mobile framework?

I’ve developed some hybrid mobile apps and all of them with Angular. Using Angular inside mobile hybrid app is literally awesome, its changing your way of thinking and its impossible to not use it next time. I think that mobile hybrid app without Angular is like a computer without internet, it can exist but it’s useless…

What grabbed me in Angular?

The controllers, views, routes, directives, services, everything … What really grabbed me in this framework is the new modern code, the MVC like structure   ( i’m PHP dev afterall ). The other great thing about Angular is that there are lots of plugins, which are pretty easy to integrate with your application. It can literally take you two minutes to set up a new modern cool countdown or calendar or whatever widget you like.

AngularJS is a great tool for your mobile app or well organized site, but the real magic comes with Angular 2 and ECMAScript 6. Almost everything is changed there, but can’t say much since its beta and i just flash tested mobile app. ECMAScript 6 will change a lot of things and it will bring the real JavaScript classes alive. The technology is improving fast and we all must learn fast in order to be up to date in this big tech world. 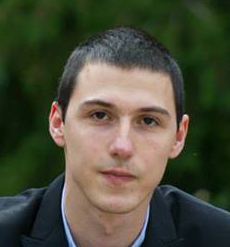 I am waiting for a message from you :)